LONDON, United Kingdom, December 21, 2021: Bayt ar-Rahmah’s Director of Strategic Outreach — Thomas Dinham — is standing down after over three years in the role, during which he worked closely with Nahdlatul Ulama spiritual leaders to help the world’s largest Muslim organization emerge upon the world stage as “a formidable challenger to powerful state actors in the battle for the soul of Islam. . . This struggle has and will affect the prospects for the emergence of a truly more tolerant and pluralistic interpretation of one of the three Abrahamic religions.” (“The Battle for the Soul of Islam,” Current Trends in Islamist Ideology, Hudson Institute Center on Islam, Democracy, and the Future of the Muslim World).

Mr. Dinham is an accomplished geopolitical analyst, journalist, author and strategic communications professional, who cut his teeth as a Middle East specialist covering events in Syria, Libya and Egypt during the height of the Arab Spring. Described by the BBC’s flagship current affairs program, From Our Own Correspondent, as “a witness to crucial days in the history of Egypt,” he has lived, studied and worked in several of the region’s key power centers, including Cairo, Abu Dhabi, Damascus and Beirut. Fluent in classical and colloquial Egyptian Arabic — both spoken and written — Mr. Dinham has profound knowledge of the manner in which state and non-state actors throughout the Muslim world deliberately weaponize problematic tenets of Islamic orthodoxy in order to maintain or acquire political, military and economic power, with all the human suffering this entails. One month after Gerakan Pemuda Ansor and Bayt ar-Rahmah hosted the Second Global Unity Forum in Yogyakarta, Ansor Chairman H. Yaqut Cholil Qoumas announced the adoption of the Nusantara Statement — which conveys the essence of the Nusantara Manifesto — at a mass rally of over 100,000 Ansor members in the Great Square of Kajen in Pekalongan, Central Java. Mr. Qoumas, now Indonesia’s Minister of Religious Affairs, presented a commemorative steel plaque engraved with the Nusantara Statement to Indonesian President Joko Widodo (“Jokowi”). President Jokowi (above) holds the Nusantara Statement aloft, before a crowd of over 100,000 members of Gerakan Pemuda Ansor and its militia, Banser (below) From 2019 – 2021, Mr. Dinham ran Bayt ar-Rahmah’s operations in the United Kingdom, playing a major role in NU spiritual leaders’ engagement with key European partners. He assisted C. Holland Taylor in drafting 4 resolutions submitted by Indonesia’s largest Islamic political party — PKB, which is rooted in the spiritual wing of Nahdlatul Ulama — to Centrist Democrat International (CDI), the world’s largest political network, with over 100 member parties in more than 70 nations, including the largest political group within the European Union, the European People’s Party (EPP). Unanimously adopted, these resolutions endorse Humanitarian Islam’s theological framework; affirm that “Western humanism, Christian democracy and Humanitarian Islam are kindred traditions”; call for “a 21st century alliance to promote a rules-based international order founded upon universal ethics and humanitarian values”; and recognize that “the foundational texts of the Humanitarian Islam movement represent a comprehensive affirmation of these universal values from within the Islamic tradition, including the principle of rahmah (universal love and compassion).”

As Director of Strategic Outreach for Bayt ar-Rahmah, Tom’s communication skills in both English and Arabic; his intimate knowledge of political Islam and the Middle East; his discipline; and his great passion proved to be a game changer in our efforts to promote a pluralistic and tolerant understanding of Islam worldwide. 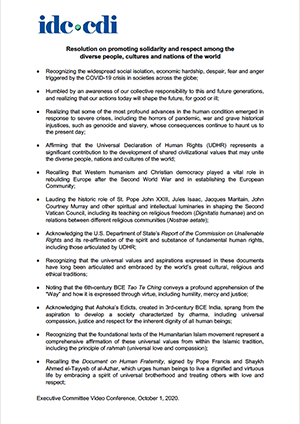 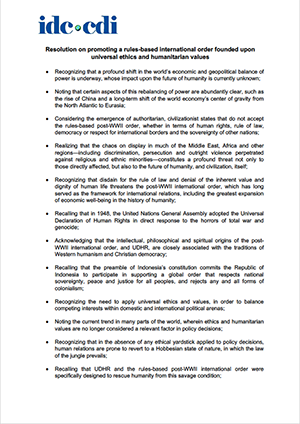 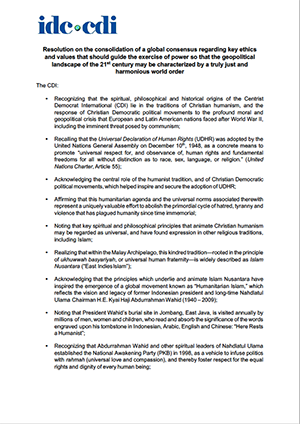 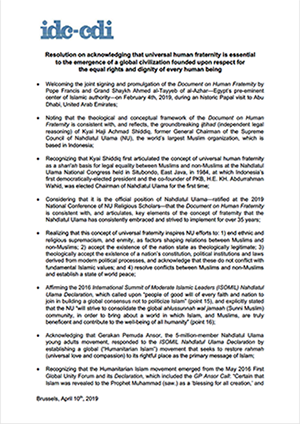 A keen observer of Arabic-language media, Mr. Dinham played a key role in exposing inflammatory remarks by President Erdogan of Turkey regarding the conversion of Hagia Sophia into a mosque in July of 2020. The remarks — tweeted in Arabic from Mr. Erdogan’s official Twitter account and bearing his signature — triggered a joint PKB/CDI statement censuring the Turkish President for his reckless attempt “to further inflame Muslim emotions in pursuit of his domestic political agenda and to serve as a cover for his violation of international norms.” The European People’s Party endorsed this PKB/CDI statement, prominently featuring it on its home page — the first time a statement by a non-EPP member party has ever been posted on the EPP website. As Director of Strategic Communications for the Humanitarian Islam/World Evangelical Alliance Joint Working Group (JWG), Mr. Dinham helped produce God Needs No Defense: Reimagining Muslim–Christian Relations in the 21st Century, a Festschrift in honor of JWG co-founder Bishop Thomas Schirrmacher’s appointment as Secretary General & CEO of the WEA. Released during the public launch of the global Movement for Shared Civilizational Values at The Nation’s Mosque in Washington, DC on July 13, 2021, the 228-page volume includes a century-old address by one of Nahdlatul Ulama’s founders, KH. Hasyim Asy’ari. Translated by C. Holland Taylor and Mr. Dinham and published in English for the first time, Kyai Hasyim’s inaugural address remains the foundational document of Nahdlatul Ulama, articulating the original and enduring ethical and theological framework embraced by the world’s largest Muslim organization. Festschrift jointly published by the Institute for Humanitarian Islam, Center for Shared Civilizational Values and World Evangelical Alliance in July 2021 During Mr. Dinham’s tenure as Director of Strategic Outreach, he assisted Humanitarian Islam leaders deliver a number of landmark op-eds and policy speeches, including an address by Indonesia’s Minister of Religious Affairs, H. Yaqut Cholil Qoumas, presented at the closing ceremony of the G20 Interfaith Forum in Bologna, Italy on September 14, 2021. Minister Qoumas’ speech helped to establish a framework for Indonesia’s Presidency of the G20 and the G20 Interfaith Forum, which will be held in 2022. In January of 2021, The Wall Street Journal featured an op-ed authored by Nahdlatul Ulama General Secretary KH. Yahya Cholil Staquf in its weekly “Houses of Worship” column, in which Mr. Staquf explains that:

The recontextualization of Islamic orthodoxy is crucial to the welfare of Muslims and non-Muslims alike. It is a prerequisite for any rational and humane solution to the multidimensional crisis that has plagued the Muslim world for more than a century. Leaders throughout the world can best contribute by examining the understanding of Islam that flourishes in Indonesia and urging other Muslim nations to consider a similar path. The rapid growth of the global Humanitarian Islam movement during Tom’s tenure with Bayt ar-Rahmah is a tribute to Tom and his ability to function effectively at the highest levels of geopolitical and religious engagement. A British citizen of Polish and English heritage, Mr. Dinham is a graduate of the University of Oxford, and holds an MA in the Politics and International Relations of the Middle East from the University of Exeter. He is leaving Bayt ar-Rahmah to “take what may be my last opportunity, while I am still young, to acquaint myself with my mother’s country and one of Europe’s great nations — Poland.”