“C. Holland Taylor doesn’t look like a man radical Muslims should fear. He is trim, unassuming, and speaks with a faint southern accent. His stylish blond haircut and trim suit give him the appearance of a fortysomething European businessman. He possesses no arsenal of weapons, holds no government post, and operates no intelligence service. Yet he runs the world’s most potent and innovative anti-extremist network and may hold a key to defusing the ticking bomb of Islamic terrorism.”

~ “In Defense of Moderation,” by Washington Post columnist Jennifer Rubin, writing in The Weekly Standard

C. Holland Taylor (above, with President Wahid of Indonesia) is co-founder, chairman and CEO of LibForAll Foundation, and the co-founder, deputy chairman and COO of its sister organization, Bayt ar-Rahmah li ad-Da‘wa al-Islamiyah Rahmatan li al-‘Alamin (Home of Divine Grace for Revealing and Nurturing Islam as a Blessing for All Creation). Mr. Taylor also serves as Emissary to the United Nations, Americas and Europe for Gerakan Pemuda Ansor, the 5-million-member young adults movement of the world’s largest Muslim organization, the Nahdlatul Ulama (NU).

LibForAll and Bayt ar-Rahmah are incorporated in Winston-Salem, NC, to which Mr. Taylor’s ancestors immigrated in search of religious freedom in the mid-18th century. The son of a U.S. military officer in the Judge Advocate General’s (JAG) Corps, Mr. Taylor was raised primarily in Europe and Asia, including Germany, Iran and South Korea. He is an expert on the Islamization of Java during the 15th and 16th centuries, and has lived, studied and worked in the Muslim world, from Iran to Indonesia, over a period of more than five decades. Mr. Taylor’s unique combination of experience in the fields of international business, strategy and the forging of cross-cultural relationships has enabled LibForAll to become “a model of what a competent public diplomacy effort in the Muslim world should look like” (Wall Street Journal), and his work was extensively cited in conjunction with the 2019 nomination of the Nahdlatul Ulama for the Nobel Peace Prize. 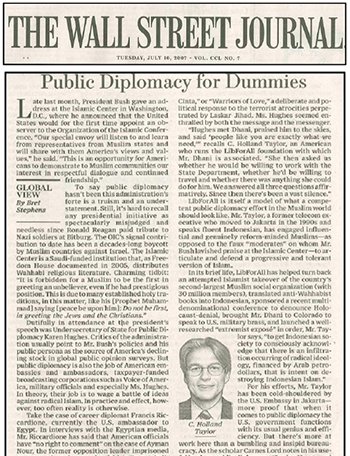 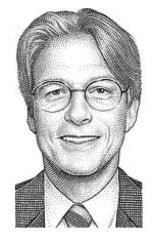 “Mr. Taylor, a former telecom executive who moved to Jakarta in the 1990s and speaks fluent Indonesian, has engaged influential and genuinely reform‐minded Muslims. . . to articulate and defend a progressive and tolerant version of Islam.

“In its brief life, LibForAll has helped turn back an attempted Islamist takeover of the country’s second‐largest Muslim social organization (with 30 million members), translated anti‐Wahhabist books into Indonesian, sponsored a recent multidenominational conference to denounce Holocaust‐denial, brought Mr. Dhani to Colorado to speak to U.S. military brass, and launched a well‐researched ‘extremist exposé’ in order, Mr. Taylor says, ‘to get Indonesian society to consciously acknowledge that there is an infiltration occurring of radical ideology, financed by Arab petrodollars, that is intent on destroying Indonesian Islam.’

“For his efforts, Mr. Taylor has been cold‐shouldered by the U.S. Embassy in Jakarta—more proof that when it comes to public diplomacy the U.S. government functions with its usual genius and efficiency. But there’s more at work here than a bumbling and insipid bureaucracy. As the scholar Carnes Lord notes in his useful book on public diplomacy, ‘Losing Hearts and Minds,’ America’s public diplomatists ‘are today no longer as convinced as they once were that America’s story is after all fundamentally a good one, or believe an alternative, negative story is at least equally plausible…’

“But if effective public diplomacy is really as vital in the war on terror as everyone appears to agree it is, we need better ambassadors, better administrators and a better sense of who we need to engage and how. At least Mr. Taylor has a clue. The administration could stand to learn from him.” Read the full article (PDF).

Mr. Taylor established LibForAll in 2003 with his close friend, former Indonesian president and NU Chairman H.E. Kyai Haji Abdurrahman Wahid (1940 – 2009), whom the Wall Street Journal described as “the single most influential religious leader in the Muslim world” and “easily the most important ally the West has in the ideological struggle against Islamic radicalism.” Under their leadership, LibForAll quickly grew into the premier NGO developing and operationalizing successful counter-extremism strategies worldwide.

“LibForAll is linking moderate Muslim leaders in a network of ‘lighthouses within the Islamic world’ that will promote tolerance and freedom of thought and worship.” 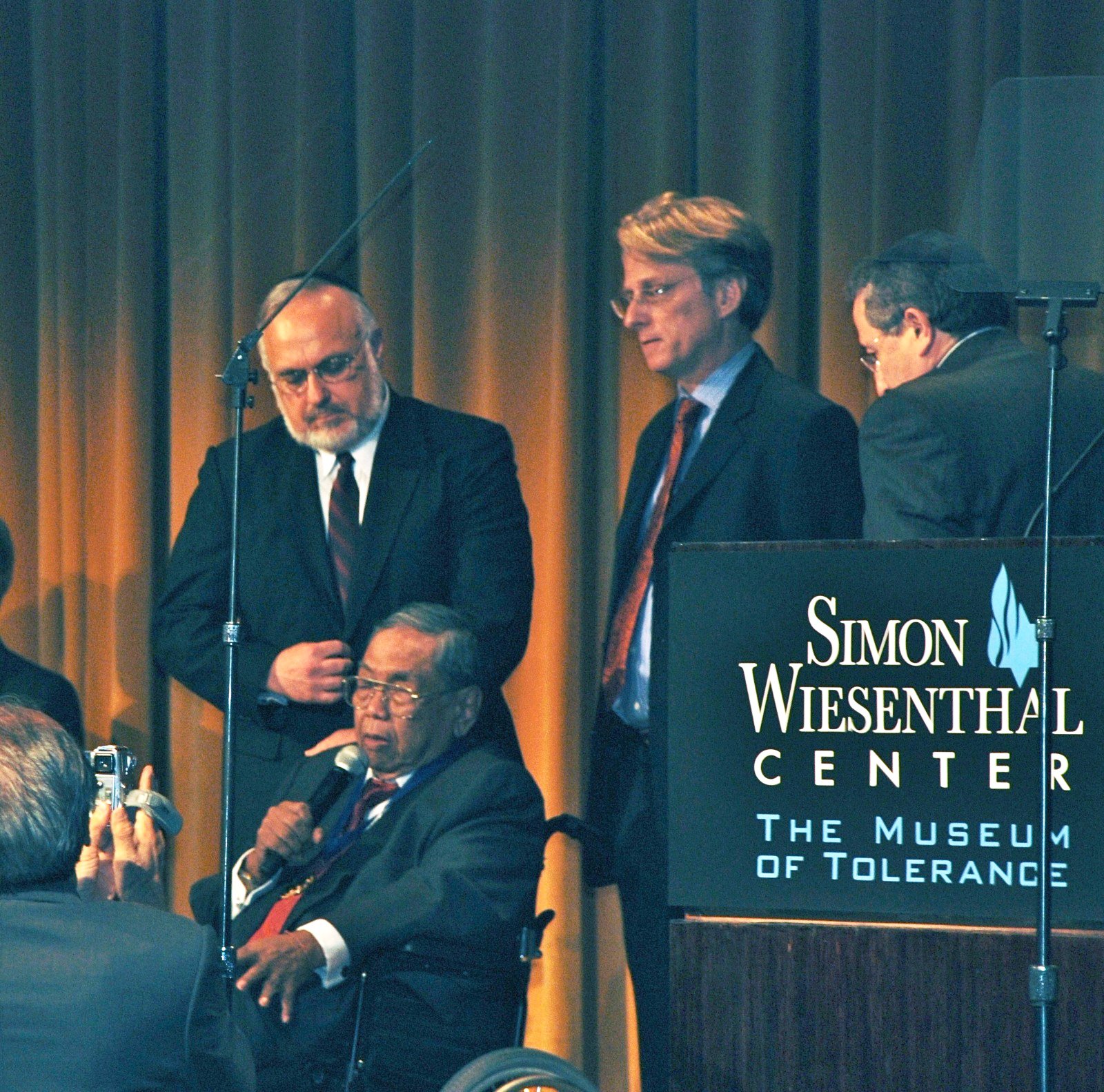 In 2014, Mr. Taylor joined KH. A. Mustofa Bisri (then Chairman of the NU Supreme Council) and KH. Yahya Cholil Staquf (General Secretary of the NU Supreme Council) in establishing Bayt ar-Rahmah. Both LibForAll and Bayt ar-Rahmah derive their inspiration from the heroic example of President Wahid’s 16th century Javanese ancestors, whose deft use of soft and hard power defeated Muslim extremists, and guaranteed freedom of religion for all Javanese, two centuries before the Virginia Statute of Religious Freedom and the Bill of Rights led to the separation of state and religion in the U.S.

Interview with KH. A. Mustofa Bisri in Brussels, after launching the English edition of The Illusion of an Islamic State at the European Parliament (2011)

In March of 2017, Bayt ar-Rahmah and Gerakan Pemuda Ansor launched a global movement (“Humanitarian Islam”) that seeks to reform obsolete tenets of Islamic orthodoxy that enjoin religious hatred, supremacy and violence, by restoring rahmah (universal love and compassion) to its rightful place as the primary message of Islam. In his capacity as the COO of Bayt ar-Rahmah and GP Ansor’s Special Emissary, Mr. Taylor has drafted a number of historic documents with NU General Secretary KH. Yahya Cholil Staquf, including: the ISOMIL Nahdlatul Ulama Declaration (2016); the First Global Unity Forum Declaration (2016); the Gerakan Pemuda Ansor Declaration on Humanitarian Islam (2017); and, most recently, the Nusantara Statement and Nusantara Manifesto (2018), through which Bayt ar-Rahmah and Gerakan Pemuda Ansor have formally launched—in a systematic and institutional manner—the reform of obsolete and problematic tenets of Islamic orthodoxy.

“The youth wing [Gerakan Pemuda Ansor] of Nahdlatul Ulama, an Indonesian Islamic group, is pressing governments around the world to bring Islamic law into line with 21st century norms.” 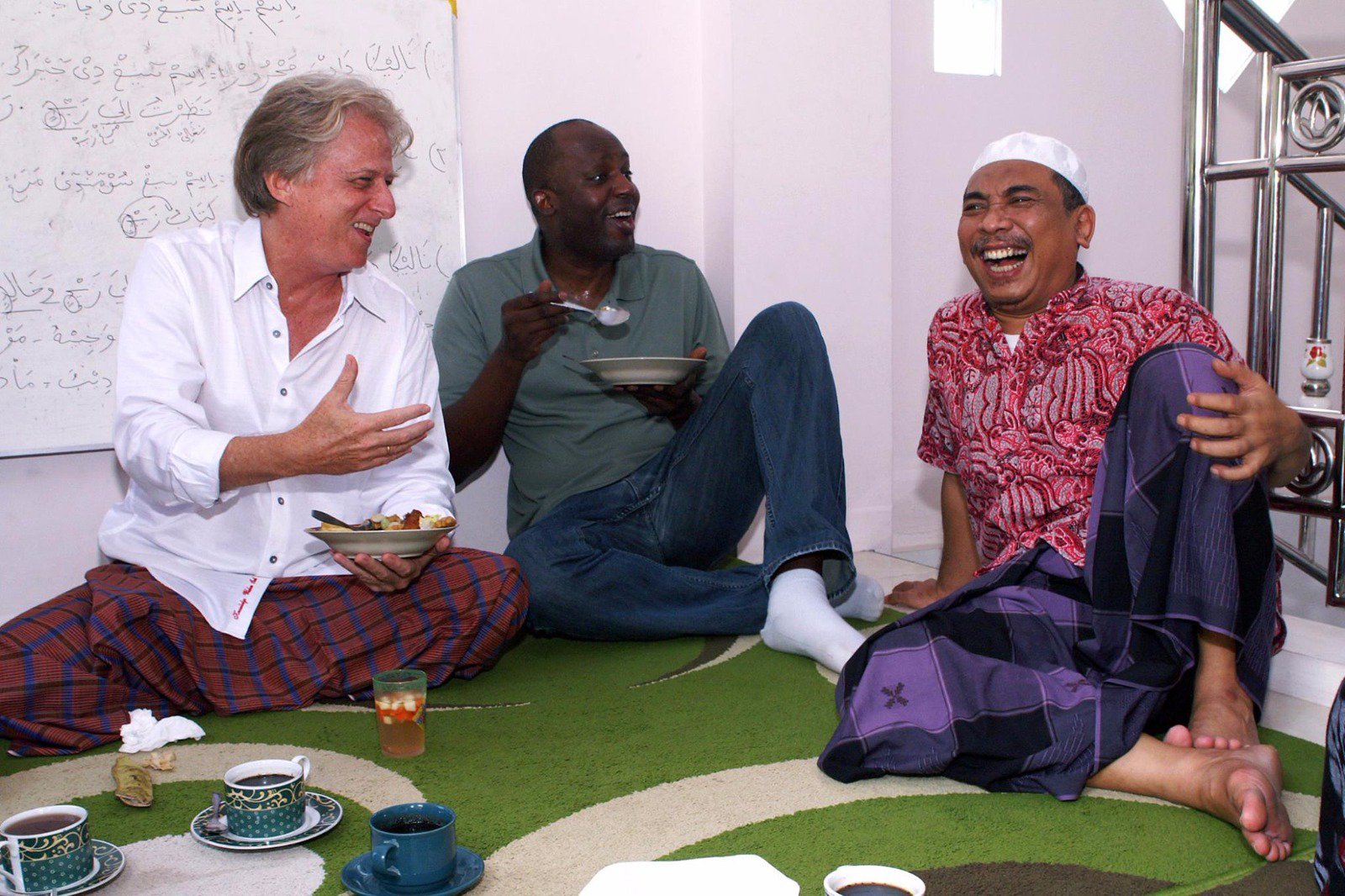 Mr. Taylor is an acclaimed speaker whose writings have been published in major media outlets throughout the world, helping to educate policy makers and the general public about how to counter the ideology of religious hatred, supremacy and violence that underlies and animates Islamist terrorism. This work follows a career as a successful entrepreneur and global telecom executive, during which Mr. Taylor served as CEO of USA Global Link, and was credited by numerous leading publications as one of the essential catalysts in the deregulation of the global telecommunications industry. Educated at the University of North Carolina – Chapel Hill and Princeton University, Mr. Taylor is fluent in English, Indonesian/Malay and German. 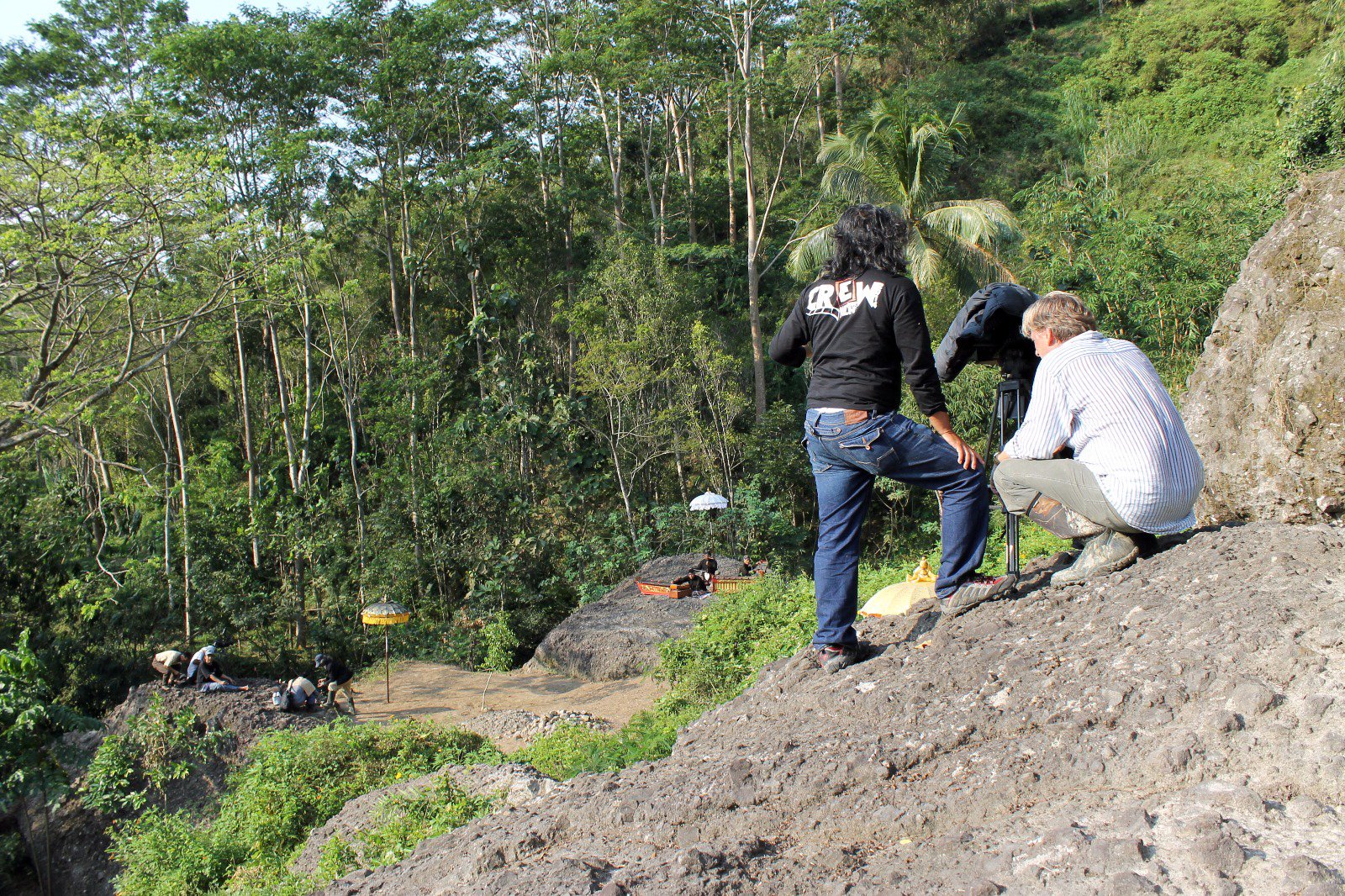 Directing a scene from The Divine Grace of Islam Nusantara (East Indies Islam), on location in Borobudur, Central Java (2014)

The Illusion of an Islamic State

Preface to the English Edition

Never, for an instant, did President Wahid ‘buy’ the notion—widely propagated by Islamists, and many in the West—that European or American support for Muslim moderates, in their struggle with Islamist extremism, will somehow discredit the former. He considered LibForAll’s track record of success—including with The Illusion of an Islamic State—to be proof positive thereof. When asked whether the name LibForAll should appear on the cover of the original Indonesian edition of this book, he replied, ‘No. But I’ll describe what LibForAll is in the opening paragraph of my introduction, so that when people see the name, they’ll also realize who’s involved with the organization, and what our purpose is.’

“Confident of his own ‘Islamicity,’ and revered as a saint by tens of millions, from the East Indies archipelago to the Middle East, President Wahid knew that moderate/spiritual Muslims alone (and, by the same token, Westerners acting alone) can no more derail the Islamist juggernaut than the Russians, Chinese or even Americans could have defeated the combined forces of Nazism and Japanese militarism in World War II, acting alone and without allies. Thus, although this book describes in great detail how to ‘fight fire with water’—i.e., how to marginalize and discredit Islamist ideology by drawing on universal spiritual principles deeply rooted within Islam itself—it does not ignore the practical dimensions of this challenge.

“Nor should readers fall into the trap of assuming that Muslims who embrace the spiritual principles articulated in this book are pacifists or religious quietists, unable to address the threat of violence, or engage effectively with the world at large. While non-violent extremists (who seek to use the repressive apparatus of the state to impose their views on others) felt the intense heat of public opprobrium generated by this book, their ideological brethren from Jemaah Islamiyah and other terrorist groups were being hunted night and day, with dozens captured or killed by Indonesia’s elite counter-terrorist task force, Detachment 88. In the fall of 2009, former Muhammadiyah chairman and LibForAll advisor Dr. Syafii Maarif—who was also advising Indonesia’s security officials, in the wake of the July attacks—informed me that the top leadership of Indonesia’s police and military hierarchy viewed The Illusion of an Islamic State as an invaluable tool for understanding, and countering, terrorists and the ideology they share with a far broader spectrum of society, on which they rely for recruitment and support.

“Upon hearing of the book’s dramatic impact in Indonesia, a former chairman of Pakistan’s armed forces—who is part of LibForAll’s counter-extremist rahmatan lil-‘âlamîn network—dispatched a similar message to us: ‘This is a great achievement, and I wish you all success as you move on in this direction.’

“Since the attacks of 9/11, America and the West have played into al-Qaeda’s hands, by focusing the overwhelming preponderance of their energy on ‘fighting fire with fire,’ while merely talking about, pretending to address or actively ignoring the hate-filled supremacist ideology that underlies and animates Islamist terrorism. All too often, Western governments and civil society institutions have been infiltrated by, or aligned themselves with, the Wahhabi/Muslim Brotherhood lobby, which seeks to prevent the West from establishing an alliance with truly moderate and progressive Muslim leaders, who espouse a loving, merciful and compassionate vision of Islam.

“Soon after Indonesia’s presidential election in July of 2009, a key figure from the istana, or presidential palace, asked to meet with me to discuss The Illusion of an Islamic State. Over dinner she remarked, ‘Para pejabat menganggap LibForAll sebagai sebuah yayasan yang luar biasa kuat dan sakti.’  (‘Many government officials regard LibForAll as a remarkably powerful foundation, possessed of sacred, and supernatural, abilities’—like those of a magical keris, or dagger, that can fly through the night and strike its opponents to the quick.)

“To use language more familiar to those living in the West, what she was saying was simple yet profound: LibForAll’s success is directly attributable to the selfless Muslim leaders who form the backbone of its global network, and their heart-felt desire to work in a spirit of mutual cooperation and respect with others—whether Christian, Hindu, Buddhist, Jewish, Muslim or atheist—who share a common love for humanity, and a desire to see Islamic teachings reconciled with the modern world of freedom, democracy and human rights. Current upheavals in the Middle East—and the escalating controversy about Islam and Islamophobia roiling North America and Europe—demonstrate the urgent need for such a process to occur.

“Those who are uncomfortable with talk about God, or with any conception of God that differs from their own, may find The Illusion of an Islamic State a challenge to their settled notions of reality. Yet those who seriously read and reflect upon the message of this book may find themselves rewarded with the unique ability to cross over the vast gulf that separates Islam and the West, and make common cause with what President Wahid liked to call the vast, silent majority of Muslims, so that together we may strive ‘to illuminate the hearts and minds of humanity… and banish the fanatical ideology of hatred to the darkness from which it emerged.’”