“With his call to revive Islamic supremacism, President Erdogan is stoking a fire that threatens to engulf the entire world” 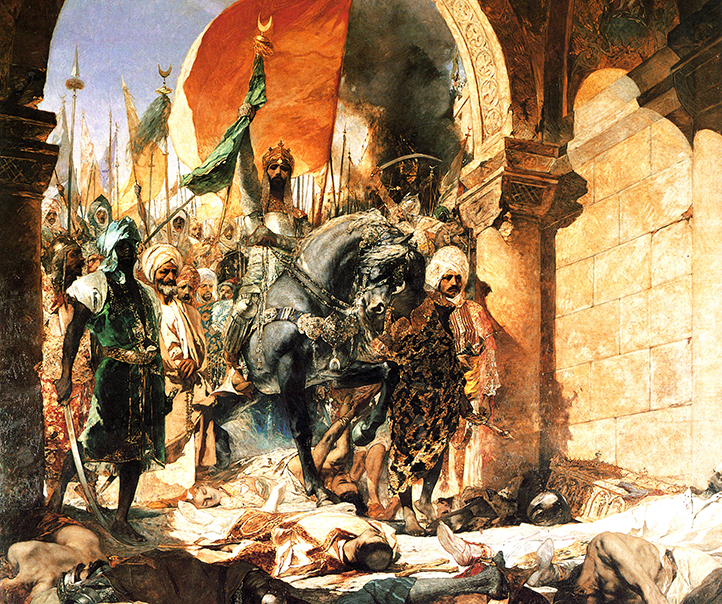 BRUSSELS, Belgium: On July 22, 2020, members of the largest political networks in the world, and Europe, set aside long-standing differences to join Indonesia’s National Awakening Party, PKB, in a call for “Muslims and people of good will of every faith and nation to prevent the political weaponization of religion.” 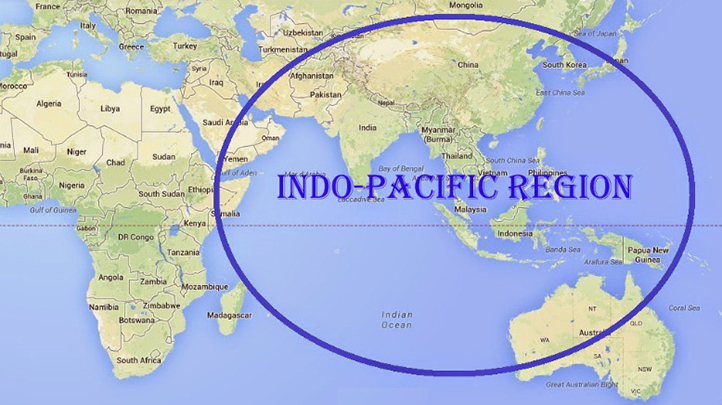 LONDON, United Kingdom, July 29, 2020: KH. Yahya Cholil Staquf—General Secretary of the world’s largest Muslim organization—has joined a high-profile international commission dedicated to forging “a new approach” to the Indo-Pacific as Britain seeks to place this strategically vital region at the center of its pursuit of a renewed global role in the wake of its exit from the European Union (Brexit).

Newly established by the most influential think tank in the United Kingdom, Policy Exchange, the Indo-Pacific Commission is led by former Canadian Prime Minister Stephen Harper, who recognizes the formative effect its recommendations are likely to have upon British foreign policy. Writing in The Telegraph—a prominent British newspaper with close links to that country’s governing Conservative Party—Harper said. . . Continue reading full communiqué. . . 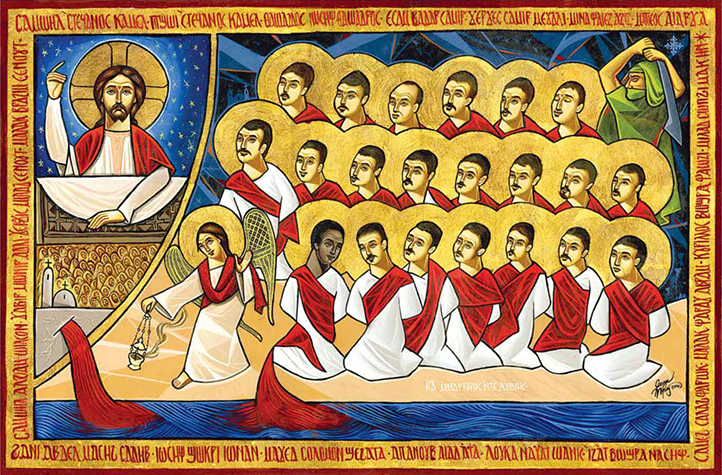 Coptic icon depicting 21 Christians who were beheaded by ISIS in Sirte, Libya, in 2015

PRINCETON, New Jersey, July 23, 2020: The General Secretary of Indonesia’s 90-million-strong Nahdlatul Ulama (NU) has called upon Muslims to lead by example and act to end the widespread, systematic and ongoing persecution of religious minorities across the Islamic world.

“Systemic prejudice and discrimination towards others, and the weaponization of ‘tribal’ identity—whether for self-preservation or self-aggrandizement—have been characteristic of nearly all societies throughout history,” said Nahdlatul Ulama General Secretary Kyai Haji Yahya Cholil Staquf, in response to recent upheavals in the U.S. and Western Europe triggered by the death of George Floyd at the hands of a U.S. policeman. Continue reading full communiqué. . .

“A movement is underway to change the face of Islam, whose base is shifting from the Middle East to Asia” 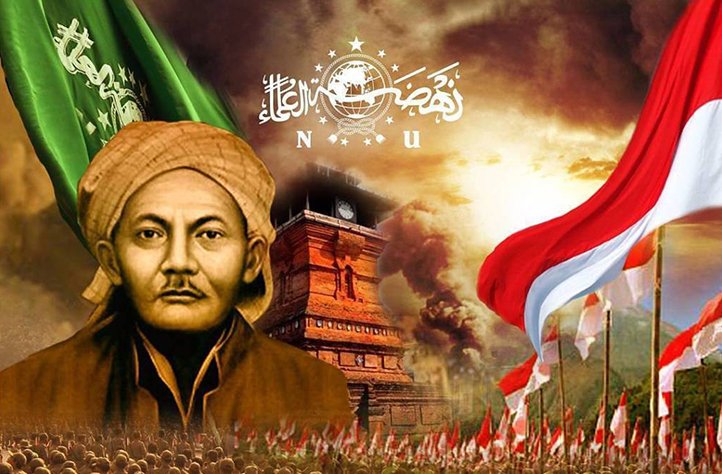 JAKARTA, Indonesia / July 2020: The largest Muslim organization on earth is spearheading a mass, grassroots, multi-faith campaign to revitalize the post-WWII rules-based international order and forge a positive role for Islam upon the world stage, where a harsh, repressive and all-too-often violent understanding of the faith has been promulgated by Middle Eastern autocrats for decades.

“Evangelical Christians and Humanitarian Muslims are committing to help protect each others’ religious communities, guided by a moral compass that is rooted in universal ethics and values.” 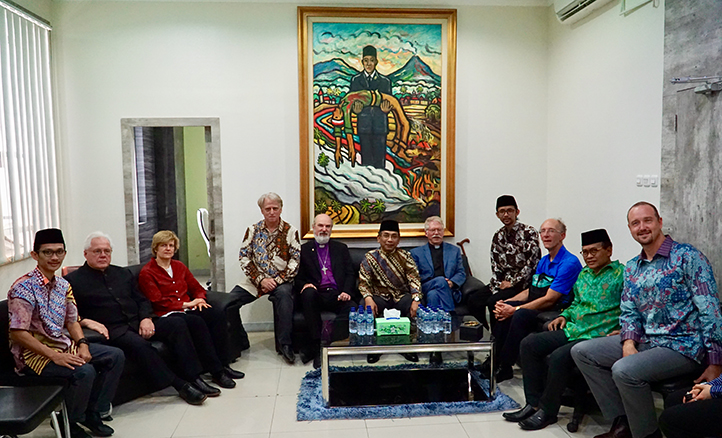 JAKARTA, Indonesia and NEW YORK, USA: 22 April 2020. Leading figures in the world’s largest Muslim organization and the world’s largest Evangelical Christian organization announced today that they are undertaking an ambitious joint effort to reshape how the world thinks about religion and to counter two threats to religious freedom and to society more broadly: religious extremism and secular extremism.

The Muslim participants represent Humanitarian Islam, which is rooted in the Nahdlatul Ulama (NU), with an estimated membership of more than 90 million, primarily in its home country of Indonesia. Since its founding almost a century ago, NU has gained wide recognition for its promotion of a version of Islamic orthodoxy characterized by respect for religious pluralism and tolerance. Its members are now found in most major cities around the globe. Continue reading full communiqué. . .

How the accusation of Islamophobia is used to stifle free speech

Longest-serving Muslim Member of Parliament concurs: “The Labour Party… seems to be intent on wielding [accusations of Islamophobia] as a weapon for rooting out ‘difficult’ voices.” 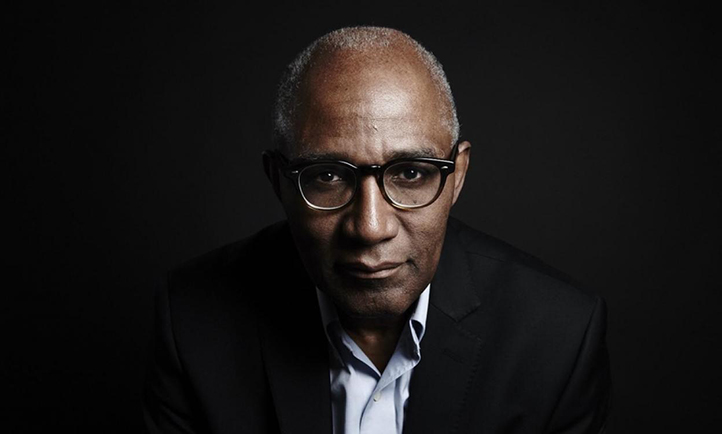 LONDON, United Kingdom: On March 9, 2020, Nahdlatul Ulama General Secretary and co-founder of the global Humanitarian Islam movement, KH. Yahya Cholil Staquf (“Gus Yahya”), defended one of the UK’s most respected anti-racism campaigners from accusations of Islamophobia, in the epilogue to a comprehensive report by premier British think tank Policy Exchange. In doing so, the Indonesian Islamic scholar added his authoritative voice to that of prominent center-left and center-right UK figures in confronting the political weaponization of Islam, which threatens to drag Muslim communities into the highly polarized and increasingly lethal “culture wars” roiling much of the West. Continue reading full communiqué. . .

“This version of Islam. . . is just the opposite of our prejudices and stereotypes”

“This is key for the European Union”

VIENNA, Austria: The Vienna-based World Security Forum has released a short film (09’38”) that documents the transformative impact of “Humanitarian Islam” upon European perceptions of the Islamic faith, and its potential to reshape political and socio-cultural relations between the Muslim world and the West.

The film was shot on location in and around Yogyakarta, Indonesia—the heartland of traditional Javanese culture—during a gathering of the world’s largest political network, Centrist Democrat International (CDI).

Those familiar with current political dynamics in Europe may be surprised by, and will probably recognize the significance of, Zsolt Németh—Chairman of the Foreign Affairs Committee of Hungary’s National Assembly—stating: “It is high time to realize that we have bad, negative stereotypes about Islam. Partially, this can be explained, but we should extend our attention to Indonesia, the biggest—and democratic—Islamic country in the world.” Continue reading full communiqué. . . 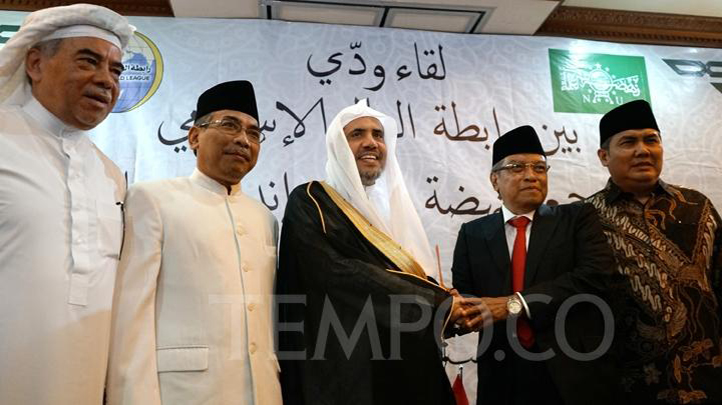 JAKARTA, Indonesia: 27 February 2020. For the first time in the 58-year history of the Saudi-backed Muslim World League (MWL), its Secretary General visited the headquarters of the world’s largest Muslim organization, Indonesia’s Nahdlatul Ulama (NU). The NU was founded in 1926 in direct response to the Saudi/Wahhabi conquest of Mecca and Medina, in order to preserve the spiritual traditions of Sunni Islam by blocking the spread of Wahhabi extremism in Maritime Southeast Asia (i.e., the Malay Archipelago).

The visit comes at a time of intense rivalry between Middle East powers—including Saudi Arabia, UAE, Qatar, Turkey and Iran—for political and religious authority, as reflected in the wars raging in Syria, Libya and Yemen, and intense maneuvering to influence governments and civil society throughout the Muslim world and the West. Continue reading full communiqué. . .

Confronting the Threat of Islamist Extremism and Terror 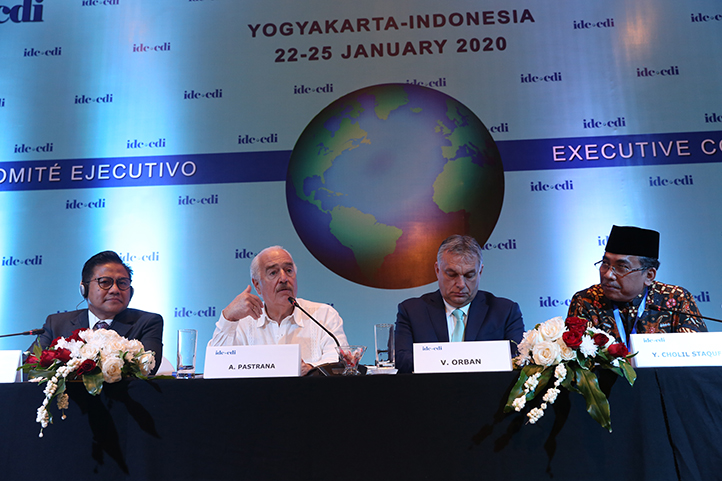 CDI’s call carries weight given that it is the world’s largest coalition of almost 100 political parties from across the globe, including ruling parties in Europe, Latin America and elsewhere ranging from German Chancellor Angela Merkel’s Christian Democratic Union to Fidesz, the party of Hungarian Prime Minister Victor Orban, a professed illiberal who envisions his country as a Christian nation.

The call takes on added significance because it was issued by a group that traces its roots to European and Latin American Christian democracy at a meeting in Indonesia, the world’s third largest democracy and its most populous majority Muslim country, hosted by the largest Indonesian Islamic political party, the National Awakening Party (PKB). Continue reading full communiqué. . .

2020_01_24_Western Humanism, Christian Democracy and Humanitarian Islam: An Alliance for the 21st Century 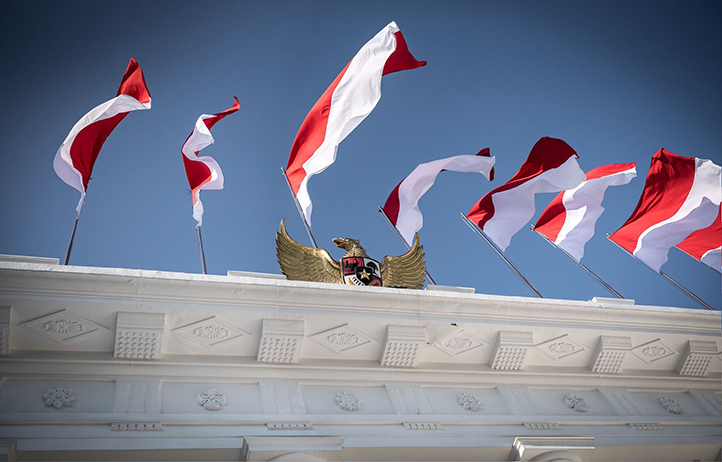 Indonesia is emerging as a major force within the geopolitical arena for the first time since the 1950s, as the Humanitarian Islam movement forges religious, socio-cultural and political alliances globally (photo of Indonesia’s State Palace in Jakarta, courtesy of the government of Hungary)

YOGYAKARTA, Indonesia: From 22 – 25 January 2020, political leaders from across the world’s cultural, geographic and religious divides gathered to address the profound ethical and strategic implications of a long-term shift in the global economic and geopolitical center of gravity away from the North Atlantic and towards Eurasia. Hosted by Indonesia’s largest Islamic political party (PKB), the world’s most extensive political network—Centrist Democrat International, or CDI—held its Executive Committee meeting in Asia for the first time in 15 years. Continue reading full communiqué. . .

2020_01_24_Indonesia’s Contribution to the Future of Civilization

Speech by H. Muhaimin Iskandar
Chairman of the National Awakening Party (PKB)
and Deputy Speaker of the People’s Representative Council, Republic of Indonesia 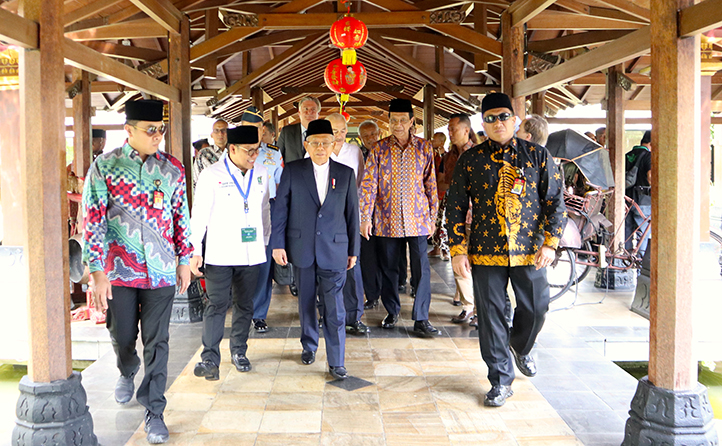 Note: Founded in 1998 by the spiritual leadership of Nahdlatul Ulama, PKB is the largest Islamic political party in Indonesia and a coalition partner within the government of President Joko Widodo.

Ladies and gentlemen, distinguished guests, brothers and sisters, many of whom have travelled thousands of miles to be here today: may the peace, mercy and blessings of God be with you.

When preparing for the establishment of Indonesia as an independent nation state, our founding fathers did not concern themselves merely with the fate of Indonesia, while ignoring the rest of the world. The profound religious, philosophical, ethical and political principles upon which they established our nation were not designed to promote the interests of Indonesia alone. Our founders contemplated the future of the entire world—proffering a set of noble aspirations that others could embrace, while striving to create a more dignified and auspicious future for all human beings, and for civilization as a whole. Continue reading full communiqué. . .

Download a PDF copy of this communiqué with images.

Download a PDF copy of this communiqué minus images.

“Religions should serve as a basis for resolving problems, not creating them.”

Pope Francis to Visit Indonesia in 2020 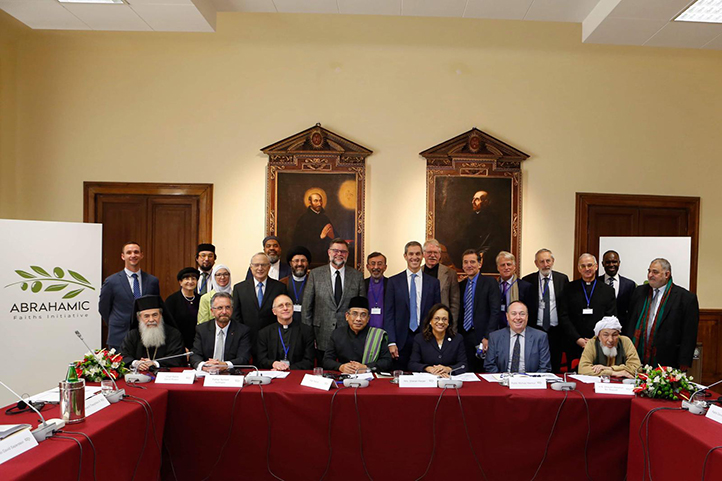 NU General Secretary KH. Yahya Cholil Staquf, center, invited his fellow theologians to “reflect honestly upon the role that obsolete and problematic religious teachings play in many contemporary conflicts. . . threatening humanity and even the future of civilization itself.”

ROME, Italy and VATICAN CITY: From 14 – 16 January 2020, eighteen Christian, Muslim and Jewish leaders gathered to explore potential avenues of cooperation between the various Abrahamic faiths, in order to address a rapidly metastasizing global crisis that is strongly colored by animosity and violence between rival ethnic and religious groups. The two-day event, convened at the Pontifical Gregorian University in Rome under Chatham House Rule, included prominent religious scholars and the heads of major faith communities from Africa, the Middle East, Southeast Asia, Europe and North America.